Showing posts from June, 2015
Show all

INTERNATIONAL DAY OF THE AFRICAN CHILD 2015: WHERE ARE OUR GIRLS? 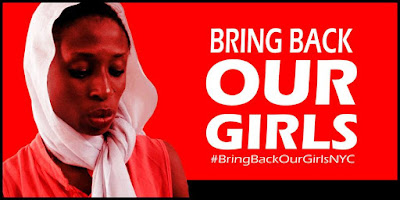 ON INTERNATIONAL DAY OF THE AFRICAN CHILD 2015 #BringBackOurGirls NYC Demands CONTINUED action toward the RESCUE AND SAFE RETURN of 219 Female Students Who Were Abducted From Their School in Chibok, BORNO STATE, Nigeria ON april 14, 2014 For Immediate Release June 16, 2015 Contact: bringbackourgirls@gmail.com ; twitter@BBOG_NYC  New York, New York –On April 14, 2014, armed militants from the insurgent Islamist group, Boko Haram, stormed female school dormitories in Chibok, Borno State, Nigeria.  The militants forcefully abducted 200+ young female students, in the middle of the night, stole supplies and burned the school to the ground.  Since the April 14 th 2014 abduction, additional girls, women and children have been abducted in Borno State. This has had a paralyzing effect on countless other female students in Nigeria who are afraid to return to school for fear of suffering a similar fate. The theme for this year’s International Day of the African Child is
Post a Comment
Read more
More posts