Showing posts from December, 2017
Show all

SSRC'S APN Best of 2017: Fleeing Boko Haram: The Trauma of Captivity and Challenge of Freedom

Seasons Greetings! I am thankful that  SSRC's African Peacebuilding Network gave Best of 2017 recognition to my paper: " Fleeing Boko Haram: The Trauma of Captivity and Challenge of Freedom ". For me, the #BringBackOurGirls struggle continues till all our #ChibokGirls & all Boko Haram abductees are rescued & reunited with their families.
Post a Comment
Read more

Issue 9 of Ìrìnkèrindò: a Journal of African Migration is published 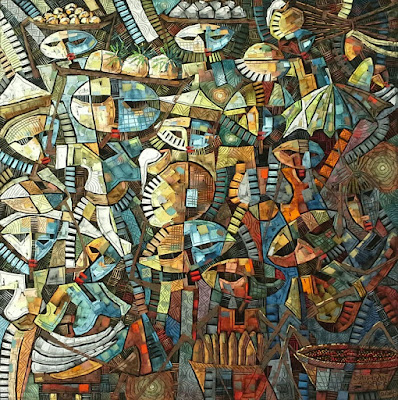 TITLE : STRUGGLING FOR SURVIVAL. (36 by 36 inches) by Gbolade Omidiran. This painting's medium is oil paints on black velvet rendered with various sizes of palette knives and not a single brush stroke. It was made in 2015. An impasto of striking colors that involves a lot of painstaking work. DESCRIPTION: All over the world, people strive and struggle to survive. Whether in the most remote forest of Ijero Ekiti or the busiest streets of Lagos or New York, we all have one thing in common 'Struggling for Survival'. This painting though abstract in expression denotes the struggles in the rural African market to make a living. A variety of African indigenous foods and goods are displayed with the traders' frantic efforts to make sales, aimed at achieving survival. I ssue 9 of Ìrìnkèrindò: a Journal of African Migration  is now published.   Contents Editorial Mixed, Perilous and Other Migrations: Do African Lives Matter?   Mojúbàolú Olufúnké Okome ...
Post a Comment
Read more

One more article: Breaching Fortress Europe: By Any Means Necessary: The Complications of African Migration to Europe 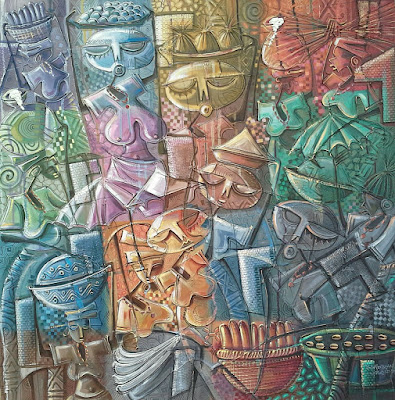 Gbolade Omidiran's Movement of the People My article, " Breaching Fortress Europe: By Any Means Necessary: TheComplications of African Migration to Europe " was first written for the conference: "African Refugees and Migrants at Europe's Door, on March 7 and 8, 2016, at Duke University. I was at the time living in in Gottingen, Germany, where I was a Senior Research Fellow at Max Planck Institute. Being in Europe opened my eyes to the plight of refugees in a new and different way, especially since some Germans thought I was a refugee, and I received the kind of treatment believed to be deserving by them. It was odd to also be a Senior Research Fellow at Max Planck--the only reason I was in Germany--and to be treated with the respect that was believed appropriate once I stepped into the Institute.  The experiences of my time in Germany, and of crossing borders, from Germany to the UK, the US, and back were also interesting, since my color meant that people
Post a Comment
Read more
More posts