Showing posts from May, 2016
Show all

#BringBackOurGirlsNYC is joyful that one of our #ChibokGirls was rescued on March 18, 2016 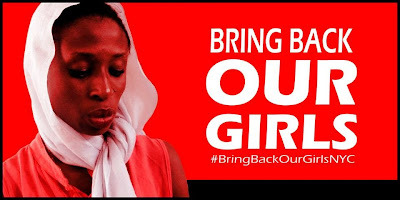 FOR IMMEDIATE RELEASE Contact: Mojúbàolú Olufúnké Okome mojubaolu@gmail.com (718) 951-5000 x 1742 NYC Wednesday March 19, 2016 It is wonderful that Amina, one of our 219 #ChibokGirls that was held captive by Boko Haram, was rescued yesterday, March 18, 2016. It was reported that she now has a baby and is allegedly expecting another baby.  Although it is unfortunate that this poor child who has just been rescued has become a mother under the horrible circumstances of being a Boko Haram captive, this rescue is great news because although the inaction of the Federal Government of Nigeria under a previous administration allowed these poor girls to languish in captivity for so long, they are valuable human beings and citizens of Nigeria.  Each of them is valuable and deserving of our celebration of their rescue from Boko Haram captivity.  Sadly, news reports include the alleged death of six (6) of our #ChibokGirls already.  This is very sad news. While awaiting official
Post a Comment
Read more

I w oke up to the great news that one of our #ChibokGirls was rescued.   The news first came to me from Prof. Hauwa Biu, who is a stalwart in the movement.  BBC also reported it:  Chibok girls: 'First kidnapped girl found' in Nigeria  So did Bukky Shonibare, who has been a key member of the Abuja BringBackOurGirls family.   I am glad that Nigerian news sources are reporting this story. They include: Channels TV, Sahara Reporters, and  Nigeria's Guardian. The UK's Telegraph  also reported the story .  I had initially posted, but removed the links to these stories from this blog because they have photos of our #ChibokGirls. My rationale: It is important to consider first of all, the complexity of the psychological condition of a person that has been subjected to this kind of extreme trauma, brutalization and sexual battery for more than two years.  Privacy is key. So is the building of a trusting relationship between victim and the therapeutic team. We don&
Post a Comment
Read more
More posts